To honor the important contributions of Robert and Rebecca Tracy to Irish Studies in the Bay Area, we are delighted to announce the establishment of the Tracy Lecture Series, aimed at bringing distinguished scholars of Irish literature and culture to the Berkeley campus.

About Robert and Rebecca Tracy 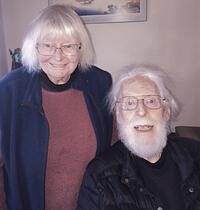 Robert Tracy (1928-2020) was Professor Emeritus of English and Celtic Studies at UC Berkeley. He graduated from Boston College in 1950, received his PhD in Comparative Literature from Harvard, joined the Berkeley faculty in 1960, and was Visiting Professor of American Literature at Leeds University, of Slavic Studies at Wellesley College, and of Anglo-Irish Literature at Trinity College, Dublin. He also served as Co-Director of the University of California Dickens Project. He published on Anthony Trollope’s novels; on Charles Dickens and on Irish topics; editions of works by Synge, Trollope, Flann O’Brien, and Le Fanu; Stone, eighty poems of Osip Mandelstam translated from the Russian; and The Unappeasable Host: Studies in Irish Identities (1998). He was a founding member, with colleagues Brendan O Hehir, Eve Sweetser and Dan Melia, of the UC Celtic Studies Program and, in l985, of ACIS West  (American Committee for Irish Studies), with Professors James Walsh, Audrey Eiler, and Don Jordan. He was a member of the Bay Area Irish Literary and Historical Society, the International Association for the Study of Irish Literatures, and the Dickens Society. In all of these enterprises, his wife Becky was a supporter, editor, research assistant, and critic. Her own theories about the importance of PLAY in education enriched Robert's approaches to Dickens, Joyce, Seamus Heaney, Paul Muldoon and Nuala Ni Domhnaill.

Rebecca Tracy graduated from Radcliffe College (now Harvard) in 1956 with an AB in History and Literature, and from Sonoma State University in 1978 with  an MA in Early Childhood Education. After a period of advocating in the 1960s with the City of Berkeley for increased child care services, she worked (1971-98) at UC Berkeley as a site director/Head Teacher for the University Child Care Program (now the Early Childhood Education Program), which provides full-day care for infants and  preschool children of University  students,  faculty and staff. At the Harold Jones Child Study Center lab school (1989-98), she was additionally responsible for  incorporating the research requirements of UC students of child development and education. After retiring in 1998 she worked for 10 more years evaluating and mentoring child care programs in Alameda County. In Ireland (Dublin, 1972) she organized classroom space and taught young children of the Travelling community. Publications include articles in the national journals Young Children and Early Education and Development. She currently serves on the Board of the Irish Literary and Historical Society, and she sings with the Berkeley Community Chorus and Orchestra.

Give to Irish Studies

Join us in our effort to endow the annual Tracy Lecture Series by making a gift today.